The recent Amsterdam Privacy Conference was accompanied by a delicate debate: How can a conference on privacy be taken seriously if it is sponsored by some of the most prominent violators of privacy? Facebook stands out here as a “Diamond sponsor” but there were more troublesome companies involved, including Google, Microsoft and Palantir (check the conference website for the full list). This resulted in a small shitstorm during the last few days. Indeed, such practices should be critically discussed. Unfortunately, most of the online grumbling I read so far does not contribute much in this regard. Here´s why.

The problematic nature of the liaison seems obvious: How can a conference on privacy be neutral if it is financed by the very actors who threaten privacy? To some the problem was so clear, it didn´t even need to be pointed out:

Oh my fucking goodness, are you fucking kidding me? “Amsterdam Privacy Week” sponsored by… https://t.co/72boB3hes8 pic.twitter.com/xlPwQIXw42

tweeted Aral Balkan, an activist and designer, in response to a picture with the sponsors´ logos. The tweet received quite a bit of attention, including a citation in a Motherboard article. Many applauded him, e.g. Sidney Vollmer who found the list of sponsors “What the fuck, indeed”. The question was raised: “Is #PrivacyWeek [the conference’s official hashtag] legit? Or white washing by co’s that really just want to get rid of this privacy thing?” (@meneerharmsen). Yes, the alliance is an easy target and I understand the suspicion. I myself was, well, let´s say surprised, when I saw the list of sponsors the first time. By the way, that was months ago and did not require any investigative skills or insight knowledge. The list screamed at you as soon you visited the APC2015-website.

However, I also noticed the numerous distinguished speakers who did not fit at all to the whitewashing hypothesis. Along with prominent academics who can hardly be accused of being lax on privacy issues (e.g. Helen Nissenbaum, Viktor Mayer-Schönberger, Julie E. Cohen) even Max Schrems gave a keynote at the conference. In case that doesn´t ring a bell: Schrems is probably Facebook´s current enemy number one as he successfully filed a number of far-reaching court cases against the Internet giant with his initiative Europe-vs-Facebook. This was reason enough for me to take the conference seriously and to draw my own conclusions by visiting it. Unfortunately, many of the critics didn´t seem to find it worth or necessary to even listen to the speakers. To them, the sponsoring itself was reason enough to dismiss the entire conference, including its organizers, speakers and content. The conflict was portrayed as a fundamental contradiction that cannot possibly be bridged: 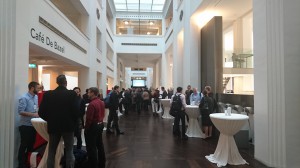 Guilt by association – a cheap tactic

This simple “guilt by association” tactic, which seems to be intuitively right to many people in the debate, comes with a significant problem: It dismisses everybody and everything under the umbrella of the event. That´s not only a prejudiced move, it´s also unfair as it illegitimately accuses even the most critical voices of whitewashing. Moreover, it´s a cheap tactic that can be used in many contexts. To illustrate that, let´s focus on of the critic Aral Balkan as an example. Should we scream “WTF?!” because Aral acts as an outspoken Facebook opponent while he himself busily feeds the object of his criticism with a constant flow of data (see his FB-profile here)? Oh, and he was also not bothered by the fact that Google, Microsoft and IBM partnered with re:publica, an influential annual conference in Berlin where he gave a talk. I could probably find more examples of this kind, but let´s not go down that dirty road any further. Obviously, I neither want to discredit Aral nor re:publica here (please forgive me to abuse you for this example). My point is that the tactic of simple and quick accusations doesn´t get us very far. It targets the wrong people and indiscriminately dismisses even the most valuable contributions.

Instead, I believe we need a more honest debate about the threats connected to Internet players. One that’s not confusing intuitive bashing of an easy target with critical thinking. One that asks the right questions and doesn’t fall for the most obvious (but not necessarily most accurate and helpful) answers.

In defense of reasoning

So what are the right questions and answers? I wouldn’t be so arrogant to claim I have them. But here are some ideas of how to get to them:

I obviously haven’t attended all sessions of the APC2015 but the ones that I sat through surely can’t be accused of Facebook whitewashing. This includes a session organized by Facebook itself in which I learned the expression “data rape” for the omnipresent service-for-profile business model. Sure, the sponsoring still might have its questionable implications. But then let’s please talk about them instead of unfounded speculation and random accusations. Sidney Vollmer assumes that the sponsoring had no influence on the content, just to add: “But we don’t know that for sure, and trust is the thing at play in these matters.” Well no, not if you actually had the chance to come and witness the event for yourself. Sidney had this chance but decided not to come as he “couldn’t shake this queasy feeling, after seeing the sponsors.” In other words, he preferred to rely on his prejudices instead of getting his own picture of the event. Too bad, I´m sure his piece on the issue would have been even more worth reading.

The actual problems are more complicated than the cheap “Facebook is buying scholars” rhetoric suggests. For example, why do academic conferences and institutions need to rely on such sponsors in the first place? What does it mean when the public sphere is more and more moving into a commercial space? (A question that was actually debated during the conference, by the way.) If the sponsoring had a bad effect, what exactly is it that´s problematic? What could actually be observed in this regard?

Yes, the big players have a fundamental impact on our lives and therefore we need to observe and also regulate them carefully. But I don´t believe in the simple and one-sided answers that many critics offer. As a matter of fact, many of them actually don´t seem to take their own arguments too seriously, otherwise they wouldn´t be heavy users of the services they bash day and night. Let´s be honest with ourselves. We´re in a dilemma. We love and fear the new technologies. “Going dark”, i.e. total non-usage, is not an option for most of us. Thus, we need a way to constructively deal with them. I don´t find it wrong to include the companies in the conversation on our way. If they finance the debate without forcing an agenda on us, even better.

Nope, Facebook didn´t just “buy” the Amsterdam Privacy Conference, at least not in the sense that many implicitly or explicitly suggest. The APC2015 was a successful conference with critical and enlightening contributions and debates. This is exactly what we need, not thoughtless shitstorms which don´t even help the critics. By drawing on cheap tactics like guilt by association, they weaken the case they might actually have. There are surely good arguments against conference sponsoring but mere association is not one of them. To be fair, some of the points worth discussing have been brought forward already. Let´s stick to them and let´s remove the fog that has been created by hasty accusations.

More importantly, let´s talk about the actual content of APC2015! This is probably where I agree the most with Sidney Vollmer: No matter whether there was a direct impact on the conference’s content, the sponsoring surely left its mark on the credibility, which did not help the cause of privacy. Now we maul each other about the (il)legitimacy of conference sponsoring instead of talking about the actual topic of the conference.

Maybe we should just treat the whole thing with a little bit more coolness and move on. I loved Zizi Papacharissi´s mocking comment on Facebook´s rather awkward giveaway:

Facebook, you need a bit more than chocolate and a conference to convince us. Sponsoring critics, let´s get back to the actual issues that we have to discuss urgently. And yes, please come to APC2016, no matter who will be the sponsor.

Disclaimer: I´m not affiliated with the organizers or Facebook nor did I receive any payments from them. However, APC2015 provided a pretty cool collection of goodies, including the now famous Facebook chocolate but I haven´t opened it (yet). I´m not writing this to please or insult anybody. I simply hope for a more constructive and truly critical debate. 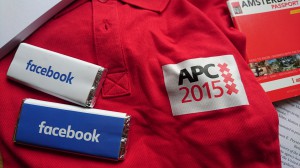 I was very happy that I was invited to give a talk at the very interesting Science 2.0 Conference in Hamburg. Thanks to the perfect organization, the event was also documented very well with videos of the presentations (find them here). Here´s my talk:

Abstract: We live in a Beta-Society: Software is structuring almost all niches of society, including academia, and more often than not, it is in a permanent beta state. As such, it is never stable nor ready and we – the users – are constantly monitored for its improvement, subjects of an ongoing real-life experiment. At the same time, users and their data have become a commodity and their interactions the foundation of Web 2.0 platforms. Therefore, developers have lowered the interaction barriers as far as possible while hiding the complexity and actual social costs of their platforms and keeping them within their “walled gardens”. Specifically, scholarly communication is increasingly mediated and structured through these services, posing a number of challenges to the academic system: opaque algorithms re-ordering scientific relevance, new forms of peer review and quality management, lay participation and privacy threats to name just a few. The talk will address these issues by focusing on concrete examples of popular Web 2.0 platforms.