I´m part of a small group of researchers who started a public debate series at ITAS in Karlsruhe called technik.kontrovers (“controversial technology”). Our idea is that Technology Assessment should also interact with the general public as our topics have significant societal implications and there is a lot to be learned from each other. After our successful start with an evening on robotics in December 2014, I was happy to contribute as a speaker together with my colleague Reinhard Heil. 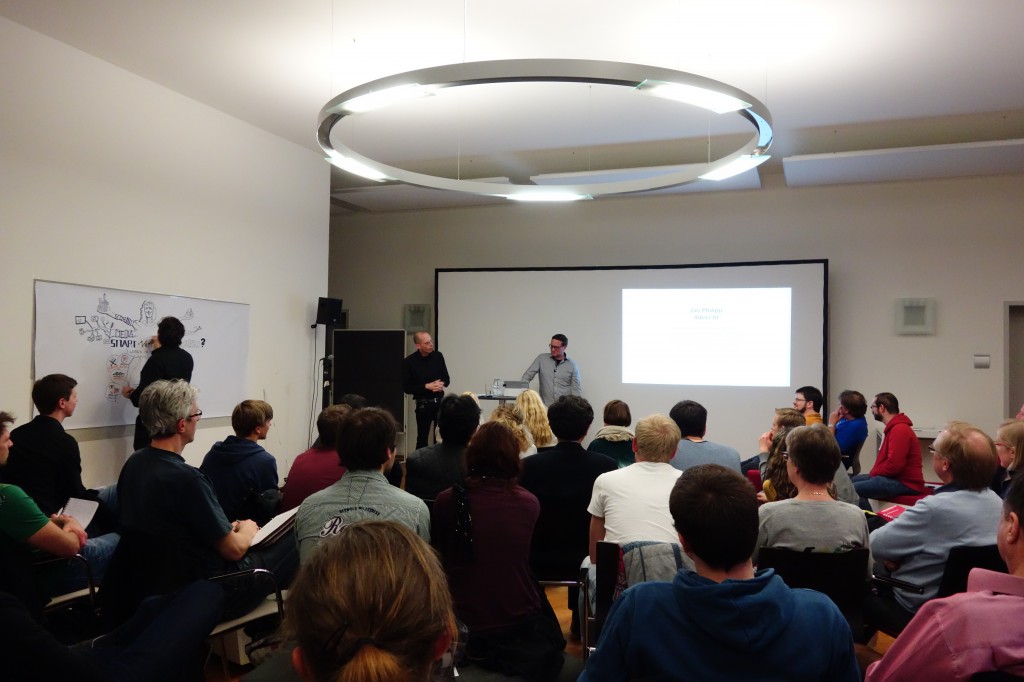 Once more our institute´s foyer reached its limits when it was filled with a diverse and very engaged audience on March 18th. There were more than enough controversial topics to discuss under the umbrella of the evening´s title “Smart. Networked. Transparent? Life in the data cloud” (German: “Smart. Vernetzt. Gläsern? Leben in der Datenwolke”): data collection through smartphones, (ab)using web surfing habits for credit scoring, personalizing insurances by analyzing individual driving behavior or health information, to name just a few. Reinhard and I gave an introduction into the wide field of Big Data and the Internet of Things in form of a dialogue with pre-defined roles: I was supposed to play an enthusiastic tech-optimist who can´t wait to try pretty much every app and gadget out there, while Reinhard acted as a slightly paranoid guy trying to keep his data profile as low as possible.

Surprisingly, I did not find it that hard to play my role as a tech-enthusiast. The overwhelming majority of the crowd had a negative outlook on the topics discussed. When the moderators asked them whether Big Data generally might improve their life, around 45 voted “no” whereas only 15 chose “yes”. Granted, our general perspective was rather critical and some of my “pro” arguments could easily be perceived negatively. For example, Minority Report´s vision of personalized advertising probably appears rather nightmarish to some and Larry Page´s claim that the analysis of health data could save 100,000 lives a year indeed could be called “ethical blackmailing” as Reinhard pointed out.

This critical bias was intended. I believe that the optimistic point of view on the developments connected to Big Data does not need much support at the moment. The Silicon Valley and its popular products has more than enough power and influence, many politicians would love to gather evermore data to enable an encompassing surveillance regime, scientists love the new possibilities coming with new data treasures and even the smallest local businesses tend to believe the promises of an dramatically increased efficiency through an automated analysis of production processes etc.

However, when I was confronted with this strong skepticism towards Big Data, I felt pushed to defend the new opportunities connected to this technology – not because it was my pre-defined role but because I actually believe it is important to keep both sides in mind. No doubt, the risks connected to Big Data have to be taken seriously. However, the reactions towards privacy and security threats are too often within diametric extremes: helpless fatalism or paranoid alarmism. Instead, we need a well-informed and balanced debate, wise decision-making with careful and considerate regulation where necessary. I hope our new project Assessing Big Data (ABIDA) will help to build a foundation for this.

Nevertheless, I very much enjoyed our heated debates and I´m looking forward to the next public evening on a completely different topic: The future of eating. By the way, once more the evening was documented artistically with a visual recording by Jens Hahn which looks pretty cool, in my opinion: